Quick-Step Floors Cycling Team (United Arab Emirates) – Quick-Step Floors raced once again flawlessly in the final kilometers, delivering the Italian to another victory and the leader's and points classification jerseys.

Three kilometers from the finish of Abu Dhabi Tour stage 2, Julian Alaphilippe took the front of the peloton on the left side, upping the tempo and clearing the way for his teammates, who had Elia Viviani on their wheel. The race was preparing to hit its climax, after a calmer intermezzo that followed 20 fast-ridden kilometers which saw the peloton get split into pieces in the desert, once the wind began causing chaos, signaling the end of the five-man break that stood for over 100 kilometers at the front of the race.

Viviani, who is making his third career appearance at the Middle East race, was caught at the wrong end of the peloton in the crosswinds, but the 30-second gap that opened didn't discourage the 29-year-old, who even traded pulls together with his Quick-Step Floors teammates until they erased the deficit and a regrouping took place inside the last 20 kilometers. 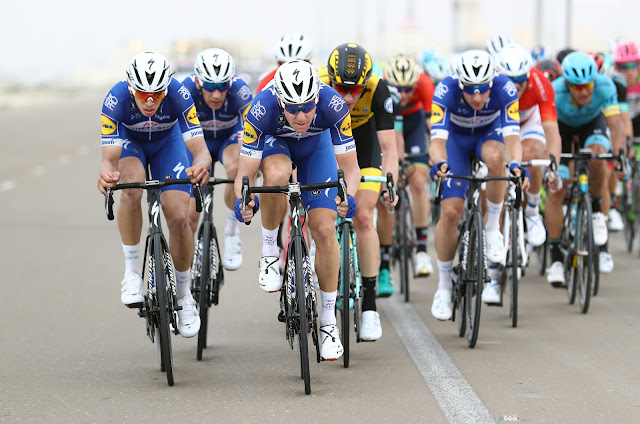 British neo-pro James Knox was once again the one to set the tempo in the bunch as they rode past the 10km-to-go mark, before best young rider of the 2017 edition Alaphilippe stepped in and furiously drove the peloton, stretching it out to the max as the flamme rouge was looming on the horizon.

Alvaro Hodeg and Michael Mørkøv stepped in, riding their wheels off until with 500 meters to go, then Fabio Sabatini did what he knows best and placed Elia Viviani in a perfect position, from which the Italian opened his sprint and stormed to a spectacular win, two bike-lengths ahead of Danny van Poppel (LottoNL-Jumbo) and Pascal Ackermann (Bora-hansgrohe), who rounded out the podium. 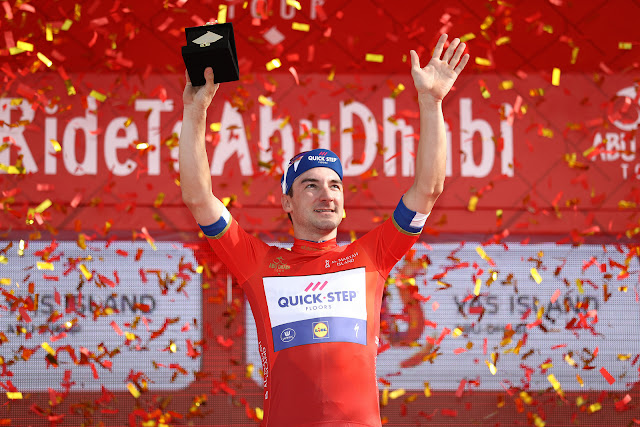 "Today I felt good, that's why I pulled in the echelons at one point. We missed timing when the wind began to blow, but I was very confident in my legs and told the guys to chase hard, and that's what Alvaro and James did. They are young, both neo-pros, but super strong, and the way they managed to bring me back was outstanding, so a big shout-out to them", said Elia at the finish in Yas Beach, before taking us through the last kilometers.

"It was an interesting day, with classic-style racing. Julian put down the hammer, before Alvaro pulled hard and led the way for Michael, who was in the right place and showed why he is one of the most experienced guys in the pack. With Saba by my side I was very calm, because I trust him 100%, and his great lead-out made my job very easy. I was extremely motivated after losing yesterday and I am happy with how things played out and for repaying the guys for their incredible work. Now there's no more pressure on us, so we'll just enjoy the moment and try again tomorrow, before the GC men will hit the spotlight", concluded Quick-Step Floors' sprinter, who is leading the overall classification and the points standings at the Abu Dhabi Tour after his fifth victory of the season.

For more information about this article from Quick-Step Alpha Vinyl click here.

Other articles from Quick-Step Alpha Vinyl. Article by SRAM: How to Choose Your Perfect Gravel Bike Introducing The Claymore from Deviate Cycles Isla Bikes: "Our New Step-Through Bike for Riders with Dwarfism"